Scott summited Everest for the third time on May 11. Turns out he also had covid. He didn’t feel well on summit day. It wasn’t until he arrived in Kathmandu and was tested that he found out he was positive. Although covid on Everest was denied, once we established that it was there, it became extremely difficult to remove him from the expedition without the actual expedition pulling the pin. It didn’t. They went up.

Scott is heading to Nepal this week for two shoots: One is with https://iconfitness.com/news.html where he will film with mountaineer, IFMGA guide, numerous Everest summiter and all-round wild woman, Lydia Bradey https://lydiabradey.com/ as they trek to Everest Base camp (EBC). Scott will remain at EBC to await his next project with the Canadian Broadcasting Corporation – an Everest clean up on a Sherpa team. Try keeping up with those guys. Ouch.

Scott will be away for 3.5 months by the time he re-enters NZ borders via the 2-week Managed Isolation system. We are feeling nostalgic about easier times of work and travel: Enjoy the video of Obie arriving at Everest Base Camp age 6 in 2013. I (Anna) will keep this blog updated.

November 2019: Scott filmed “Dream Mountain” with Climber-Mother-Adventurer Pasang Lhamu Sherpa Akita. Pasang travels to Cholatse (6440m/21130ft) with her two-year old son and husband. In a theme common to many mothers, Pasang is troubled at leaving her son at basecamp but the drive to climb is strong. Beautifully shot (of course), evocative Nepal Himalaya, a story told through the eyes of a woman Sherpa alpinist on a Himalayan peak. This film just won Best Mountain Film at the London Mountain Film Festival.

Both Scott and his media manager were exceptionally busy in 2019 and only now during the pandemic, are they able to update Scott Simper Productions. Enjoy some stories and accounts over the coming weeks. Stay home and stay healthy. And be kind!

Mongolia: Motorcycling and climbing: Scott joined adventurer Jamie Clarke (his cohort from Everest 2010) to film Jamie and his teenage son Khobi riding motorbikes across Mongolia in a quest to bridge the digital divide between them. After riding the KTM 450’s for 1100 miles, the team of three climb Mongolia’s highest peak: Khüiten Peak (Mongolian: Хүйтэн оргил, lit. “cold peak” ; also as Friendship Peak in China; Chinese: 友谊峰; pinyin: Yǒuyì Fēng) is 4,356 m above sea level and a permanent snow cap in the Altai Range. The international border between China and Mongolia runs across its summit point.

The connection is Castle Hill Village where we live in New Zealand.  Our neighbours Hop and Sally practice a simple, peaceful style of meditation called Ascension.  An example of the mindset is described in a newsletter received today;

“This week – when you Ascend, don’t Ascend for any reason at all. Don’t do it to get anything, at all. Don’t do it to get rid of thoughts, don’t do it for anything. Not even for peace, not even for rest. Just do it, with wide open innocence, without expectations.
Show up for sure – keep regularly practicing – but without any insistences, without looking for anything.
Then you can completely let go and receive what you need to receive, not what you think you want to get.”
The mission of ascension is to create peace – a method to create a peace that is bigger than your problem.  The mission of Hop and Sally is to spread peace and spearheading this film that takes us into Mexican prisons, to Cuban elite ballet schools, and to the West Coast of New Zealand, was a way to scatter peace.
It’s a beautiful film.

“Stunning cinematography combined with the power of people sharing from a place of profound peace delivers a palpable and moving experience”.

“A convincing portrayal of how inner peace is possible for all.” Oaxaca Film Festival 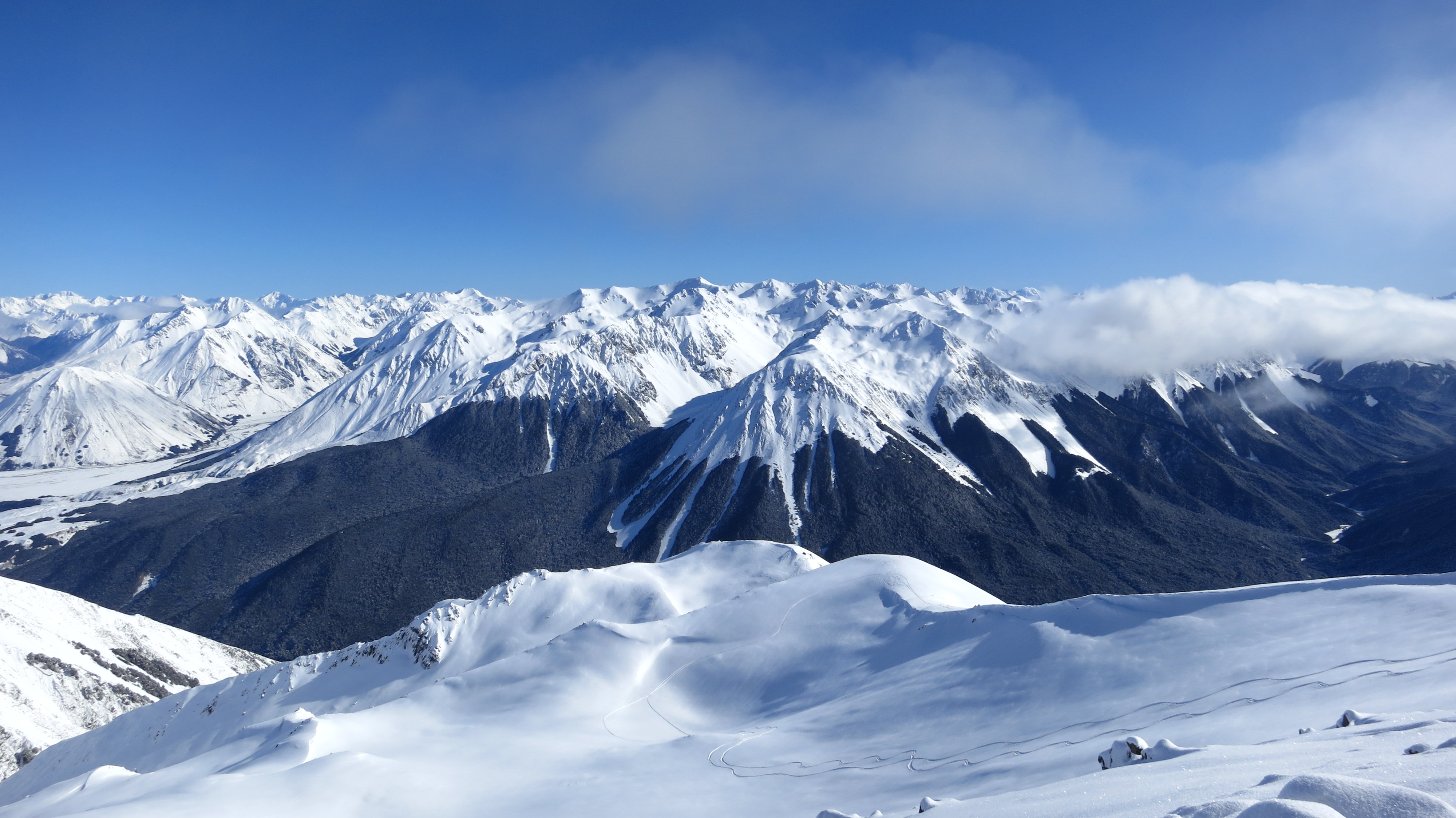 A few years ago Scott filmed the Cave Connection for Red Bull Media.  He joined notorious caver, Kieran MacKay and crew to find a link between two cave systems in New Zealand – the Nettlebed system and Stormy Pots.  It was spring.  The weather on the surface was all over the show.  I dropped Scott off to meet Kieran for a reconnaisance and you could tell Kieran was immediately stoked to see that Scott is not a big guy. Meaning he could squeeze though the tight spots.

The film was really popular and won awards at various film festivals.  What gets me is that Scott had to do all the squeezes and underwater sections right along there with the caving team.  He’d filmed in caves before but he’s not exactly a regular cave explorer.  Watching this film gives me the creeps.  I’d thought that it was bad enough to contemplate the sleeping in 40 year old sleeping bags stored permanently underground; Or that bedtime consisted simply of turning out the light and setting the alarm to wake you into the same scene of absolute darkness 6-8 hours later.  But no, the film takes you into the pure grovelliness of cave exploration.  As Mick Hopkinson, early NZ “pot-holer” explains in his Manchurian accent:  “It’s a dirty, cold sport – with no heroes”.

It was exactly a week ago – Saturday May 27 Nepal time that the Pender team stepped to the top.  It was a long trip – the weather was capricious this year and there were limited summit days.  May 27 was the final day of the brief Everest season.

Paul, Mike (guide), Scott and six Sherpas:   Sange Dorjee, Nima Nuru, Purba Choter (Ang Jangbu), Mingmar Tenji, Passang Wongchu and Pemba Chote, left Camp 4 at the South Col at 8pm on the 26th for an all-nighter to the top.  They made fairly good progress on a mostly quiet climbing day and arrived at the summit at dawn on the 27th.  Flurries of snow swirled – When I get the picture up, you’ll see that Scottie’s eye lashes look frosty.  It’s not cozy.

We were thrilled to hear they had finally made the top.  From there, Scott can come home.  It really feels like downhill.  No time was lost and Scott skipped home in 5 days.  They helicoptered to Kathmandu from Basecamp – hence the quick return. We are happy to have him back after two months and 4 days!

Scott is currently at Camp 2 fending off what appears to be flu.  He and Paul and guide, Mike went down to Namche Bazaar for 5 days to rest but Scott seems to have caught a bug there.  With great difficulty no doubt, the bug is being transported upon high.  Not fun or easy at 6500 metres.  The AC doc is keeping tabs on him and he’s taking everything to beat it back.

The main AC team including our good friend Suze Kelly, summited yesterday. Yay for Suze!  Scott and team are looking for a summit bid this coming Thursday or Friday (May 25-26).  Fingers crossed.  Send healing and easy breathing vibes Scott’s way….

Thanks for following Scott’s blog.  They did their first acclimatization round and tagged the bottom of the Lhotse face (6850m) then returned to EBC after 6 days up high.  Scott tweaked his knee on the way back down but it’s all taped up and has continued to improve since being back at base camp.  After that first round of acclimatizing, it’s important to return to recuperate.  Many have coughs and cold which really play havoc on the breathing up high.

The Pender team (Scott’s) set off at 1am Nepal time on the 28th to head back up for the second round of acclimatizing.  They’ll be hoping to get to camp 3 on the Lhotse face and will spend several nights at camp 2.  Then they’ll return to rest up and wait for the weather for their summit bid.  The key factor is letting the jet stream winds die down.  This happens only for the first two weeks of May usually.  The team is hoping for a May 12 summit bid.

In all AC posts and all conversations with Scottie, Blizzard the dog is a key feature.  He or she followed the team up to EBC and s/he’s followed them way up into the Icefall.  The entire team is besotted and Suze (AC manager) wants to take the dog home apparently.  The team next door is trying to steal Blizzard.  The latest is that Blizzard has fleas so they are trying to get a flea collar brought from Kathmandu.  Dogs in Nepal are not usually pets.  This is a feral opportunist canine!  But a most beloved one.  She did a runner for one night and the crew were devastated.  Obviously she missed her dinner so is now back.

Stay tuned for updates on the adventures of the high alpine dog and her followers.

Here’s a pic copied from the AC dispatch.  Classic – Scott is holding Blizzard’s paw.  He’s a dog lover from way back….

Scott has arrived in basecamp (EBC) and has pimped out his tent for the long haul. Anyone who’s hung out with him knows he’s a master organizer! He’ll be based at EBC for the next month at least.  All is going well – they crossed Chukung Ri (a pass) then climbed Lobuche East (20075 ft / 6119 m) to hasten their acclimatization without going through the dangerous Khumbu Icefall too many times.

The Puja took place today (or yesterday depending on who is reading this and where).  Thus blessings are completed and the process of climbing Mt Everest will begin in the next few days.  First:  an acclimatization round to Camp 2 or Camp 3, all going well.  He’ll be on the mountain for about a week then they will return to EBC for a rest before doing at least one other acclimatization round.  The purpose of all this upping and downing is to allow the blood to adapt to the thin air way up in the jet stream parts of our atmosphere.  As an example – if you or I went to the summit of Mt Everest (say we parachuted out of a jet), we’d be dead of asphyxia within 5 minutes.  Hence the need for a gradual ascent.  Fitness doesn’t really play into it much – although the better shape you are, the better your coping mechanisms.

Here are some images from the Puja: 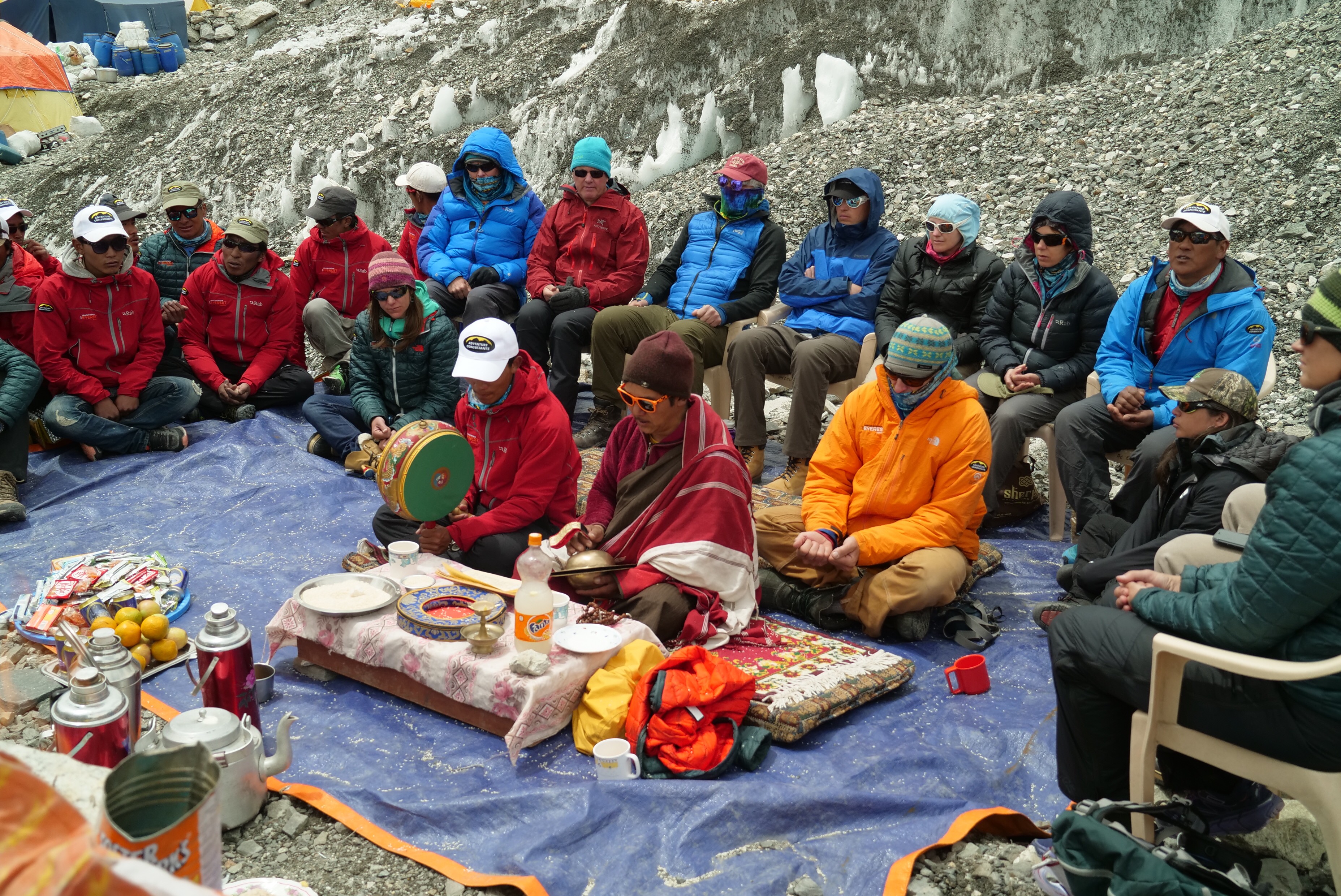 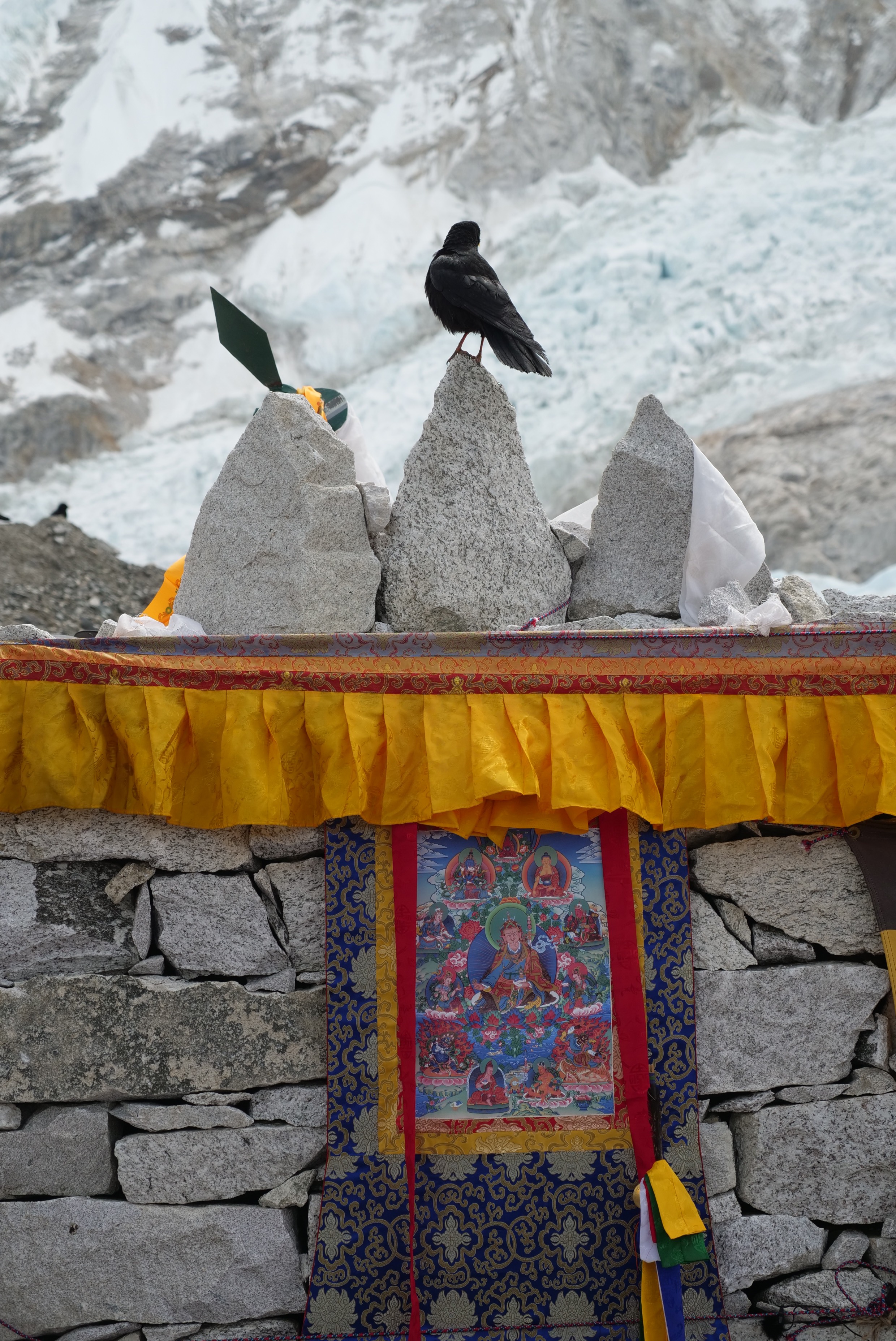